The MTA and a local charity have teamed up to ensure children stuck in a hospital bed around Christmas get into the holiday spirit — and get a visit from Santa — during a three-decade tradition of gift-giving.

An MTA bus was transformed into Santa’s mobile workshop and rolled to two Staten Island hospitals on Friday to deliver gifts to sick children in need of Christmas cheer. MTA employees, with support from the non-profit organization Kids Against Cancer, played an important role in raising the spirits of the children by giving early Christmas gifts at Staten Island University Hospital and Richmond University Medical Center.

MTA workers from four bus depots bought about $20,000 worth of gifts this year with help from two local schools while crews spent weeks leading up to the big day decorating the bus with holiday lights and ornaments.

A little girl was smiling ear-to-ear when Santa Claus, an MTA bus driver dressed in red with a large white beard, showed up at Staten Island University Hospital on Friday. Lanika Khan, just 6 years old, couldn’t contain her excitement when Santa Claus told her and handed out gifts.

Her father told the Post the moment was special because his daughter – in hospital for five days – was distraught when her hospitalization meant she missed breakfast at school with her classmates and a visit to Santa Claus at the mall.

“That moment boosted her spirits because Santa Claus made her smile. She has been upset for the past five days. Now she has a smile on her face.”

A 14-year-old girl opened her mouth and eyes wide when she saw Santa Claus and Mrs. Claus.

She snapped a picture with them and Facetimed her mother to tell her about the special visit.

“Mom, has Santa come? Look what I have!” she exclaimed.

MTA staffer Bill Lewis, the bus driver who skillfully played the role of Kris Kringle, said he plans to be the big man in the red hat for as long as possible. He spent the day running Santa’s Express and handing out presents while telling Christmas stories.

A child’s joy is what the Christmas season is all about, he explained.

“It warms my heart to see the children smiling,” he said, touching his left breast. “It makes you feel joy… if you can put a smile on a child’s face, it’s automatically joy. You can definitely see it on their faces and their smiles.”

The 12-year-old MTA worker, who declined to give her name to remain in character, said it could be “heartbreaking” to see children in hospital during the holidays.

“But the reward is great – if we give them just a moment, just a smile, that’s all,” she added, her smile returning. “It’s just heartwarming.”

Another MTA employee involved in the effort, Anthony Vultaggio, told the Post he tries to help every year. The attendant at the Yukon Depot – one of the places where gifts are picked up – called it a great feeling.

“Despite the struggle they are waging, this will brighten their day given what they have overcome,” said the 34-year-old.

“I hope these are not the only gifts they will receive, but also a clean bill of health. This is my wish for her.”

MTA maintenance mechanic Gabriel Metzger, 58, said he plans to fill in even when he retires early next year. He’s part of the crew that cleans the bus and makes sure it’s ready to travel.

“This touches me because I’m a father … it’s personal to me,” he explained. “As a father, I thank God my children are healthy and I want all children to be healthy.”

Mark Russo, CEO of Kids Against Cancer, said that children who spend Christmas in the hospital receive “special, unique gifts based on their wish list or Santa’s list.” Requests can range from expensive gifts like video game consoles and drones to soccer balls, soccer balls and coloring books, he noted.

As the organization nears its 30th year, he said the excitement never wanes.

“When I see Santa and Mrs. Claus getting off the Santa’s Express, it’s a beautiful moment, you could see everyone’s faces light up,” he said. “I feel like a little kid at Christmas.” 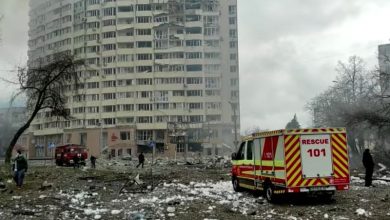 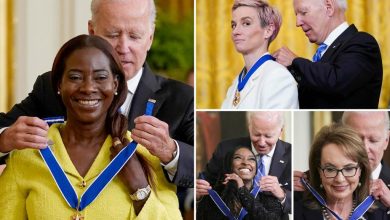 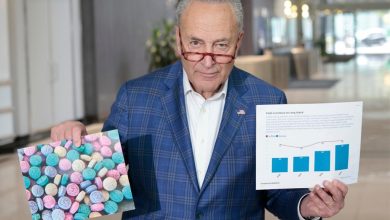 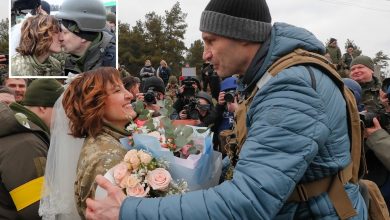