Ryan Matthew Conlon, 37, of Halethorpe, Maryland; and Scott Ryan Merryman, 37, of Independence, Kansas; both were arrested last week. Conlon’s case is sealed until Monday. He was also charged with threatening to blow up the National Security Agency headquarters.

Merryman was arrested after he traveled from home to Maryland. Merryman called police in his hometown last Tuesday and said he was on his way to Washington, D.C. to meet the president, federal authorities said.

When a Secret Service agent called him last Wednesday, Merryman said God told him to come to Washington to “take off the head of the snake in the heart of the nation,” according to an FBI agent’s affidavit.

“Merryman denied that the snake was the President of the United States, but claimed that he had information about the Book of Revelation which he was being directed by God to give to the President,” the representative wrote.

Merryman was unarmed but had ammunition and a scope in his backpack when agents found him in the parking lot of a restaurant in Hagerstown, Maryland, last Wednesday.

The next day, Merryman called the White House switchboard and said he was going there to “decapitate the serpent/antichrist,” the FBI affidavit said.

An assistant federal public defender assigned to represent Merryman interrupted him when he began talking about Biden during Monday’s hearing and repeatedly pleaded with the judge to release him. Sargent talked about arranging for Merryman to get a mental health assessment while he was in prison.

One of Merryman’s attorneys did not immediately respond to an email seeking comment on the allegations.

Court records do not list an attorney for Conlon, who was released from prison after his first court appearance last week. U.S. District Court Judge A. David Copperthite ordered Conlon not to use the computer or any other internet-connected device without the permission of the probation officer.

Conlon allegedly sent a string of text messages to the NSA and FBI headlines threatening to bomb the White House to kill the president, blowing up the NSA headquarters in Ft. Meade, Maryland, and carried out a mass shooting of NSA employees. According to the FBI, investigators traced text messages to a Maryland phone number and address linked to Conlon.

The FBI found a Facebook account with the username “Target TI” with a profile picture that appeared to depict Conlon. This account posted a picture of a white Chevrolet Tahoe and described it as the “Gangstalker” that followed him on New Year’s Eve.

Investigators called Conlon, who said the car was parked next to him in a parking lot once and “made him feel targeted,” an FBI agent’s affidavit said.

“Conlon apologizes for sending threats when he became angry,” the representative wrote.

Christine Sarteschi, a professor of criminology and social work at Chatham University in Pittsburgh, says people who consider themselves “targeted individuals” are victims of “gangs of stalking”.

“Basically, they believe there is an organized group of people or organized group efforts to do it,” says Sateschi, who wrote a 2018 journal article about targeted individuals. harm them.

(© Copyright 2022 The Associated Press. All rights reserved. This material may not be published, broadcast, rewritten or redistributed.)

Clothes from Kate Moss' Topshop collection are selling for up to £1,000 on eBay 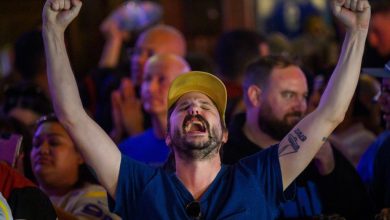