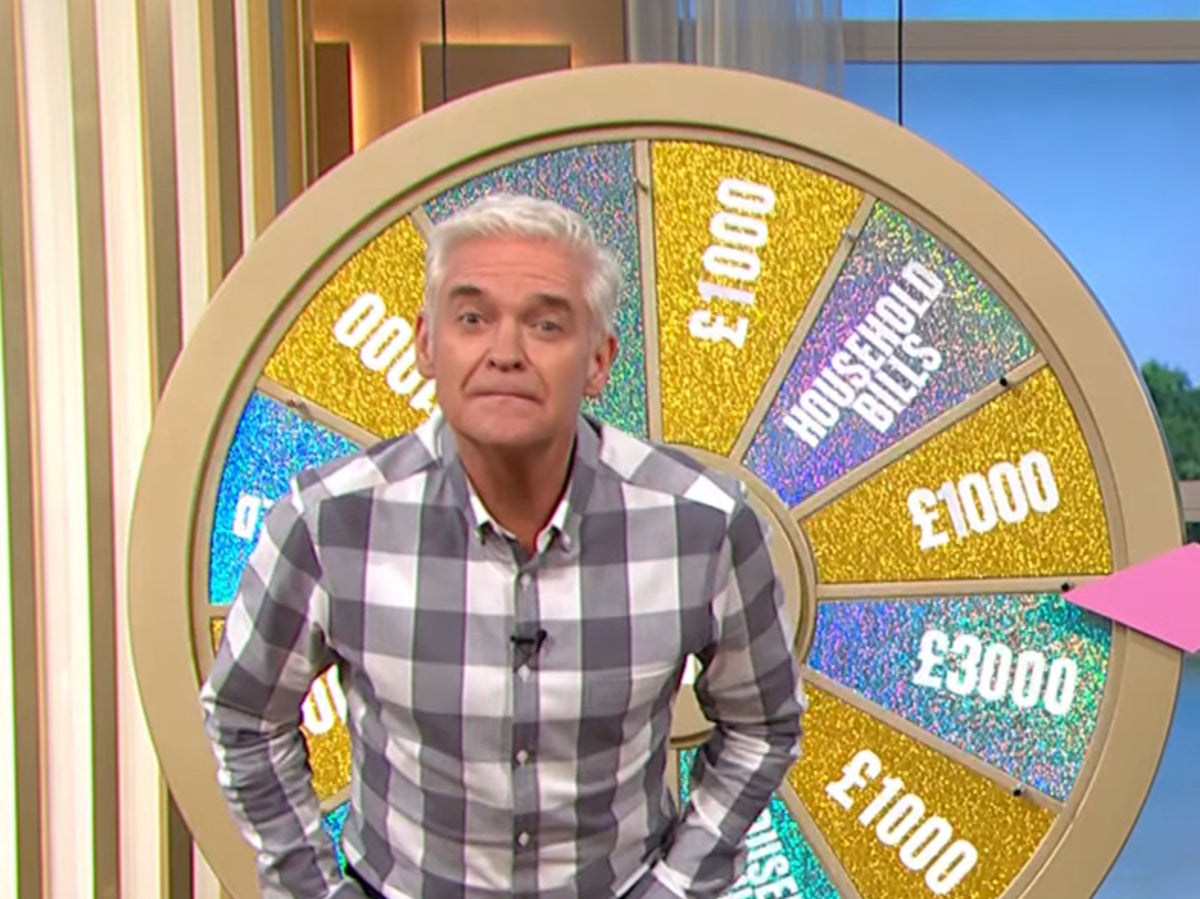 Spin the wheel and gain some heating. This was the premise of a segment on ITVs This morning earlier this week. Hosts Phillip Schofield and Holly Willoughby stood astride a spinning wheel marked with various monetary denominations and in some seats the promise of four months’ energy bills to be paid by the scheme.

The segment used the looming energy crisis as a topical hook to spice up a routine awards show, but there was something uncomfortably crude about it — made worse by the desperation in the contestant’s voice on the phone, his audible relief when he dialed landed on ” Bills”. The clip was rightly condemned; Words like “dystopian” were thrown around without exaggeration. On Wednesday, the “Household Bills” prizes were removed from the Spin-to-Win contest. But during This morningThe cost-of-living crisis carnival game This morning Before. The series suffers from the same malady that’s rife throughout our country’s morning television ecosystem: a deadly allergy to political sincerity.

Morning shows (like ITV’s This morning, Good morning Britain and Lorraineand channel 5 Jeremy Vine) are intended to appeal to a broad mass market of everyday people. As such, they are committed to addressing the issues of the day: Brexit; covid; the cost of living crisis; Downing Street’s manic conveyor belt of increasingly useless Prime Ministers. But these questions are rarely explored in real depth, with the context that is actually needed. We live in a politically extremely tense country. Our institutions are crumbling. Social rifts are getting bigger. The crises are piling up. Anger and frustration are everywhere. What’s the use of beating this to foam?

Even when these daytime talk shows cover serious topics, you always get the sense that someone offscreen is yelling, “Keep it light!” every five seconds. The fact is that almost everyone is watching This morning or Good morning Britain will have strong opinions. About the government. About income inequality. About immigration. About Brexit. Refusing to examine these issues with the proper weight only means that ill-informed opinions go unchallenged and legitimate grievances smolder.

Part of this, of course, stems from the need for impartiality—or rather, the need for the illusion of impartiality. The more politically-minded morning shows, such as Jeremy Vine, will often invite two ideologically polarized guests into the series, where they will discuss a topic with oscillating ambiguity. But even when a person clearly has the best argument (the most compassionate, the most financially smart, the most fact-based), the format almost always requires some sort of routine “let’s agree to disagree” resolution. Gone are the days of spineless fence sitting. There is no such thing as political neutrality, and it’s rhetorically jarring to pretend otherwise.

All of these issues were brought into the spotlight last Sunday when comedian Joe Lycett appeared on the BBC morning show Sunday with Laura Kuenssberg. Unlike the other shows discussed above, Sunday has an obvious political bent: Kuenssberg is the former political head of the BBC. Lycett drew the ire of conservative politicians and commentators after she jokingly pretended to be “far right” and offered empty, implicitly ridiculous praise to Liz Truss. The allegations flew – that he cheapened an otherwise dignified format, that comedians shouldn’t be invited on credible adult talk shows.

But while Lycett’s stunt appears on the surface to play with the usual mundane, entertainment-oriented preferences of morning television, the truth is the opposite. The content of Lycett’s joke – that Truss’s politics, leadership and communication are so pathetically bad that the mere act of praising her cannot possibly be read as sincere – is anything but frivolous. It’s humor born out of years of growing political anger. And it upset the supposed “balance” of the program line-up. How do you argue with a man who wins by simply agreeing with you?

Frankly, it’s no wonder the Conservative outrage machine has sprung into action (to the ridiculous extent of mentioning Lycett’s talk show escapade in Parliament). For once, morning television had treated this government with the contempt it deserved. If only that would become commonplace. It’s about time broadcasters really gave people something to wake up to.

https://www.independent.co.uk/arts-entertainment/tv/features/energy-bills-liz-truss-this-morning-today-joe-lycett-complaint-b2162354.html This Morning Today: As Britain implodes, daytime TV needs to get political

Ricky Martin is suing his nephew, who has accused him of incest and sexual abuse, for $20 million

Jack Keating: Who is the Love Island contestant in Casa Amor with the famous dad?

How Late Night Hosts Responded To Will Smith Slapping Chris Rock: “No One Raised A Finger!”