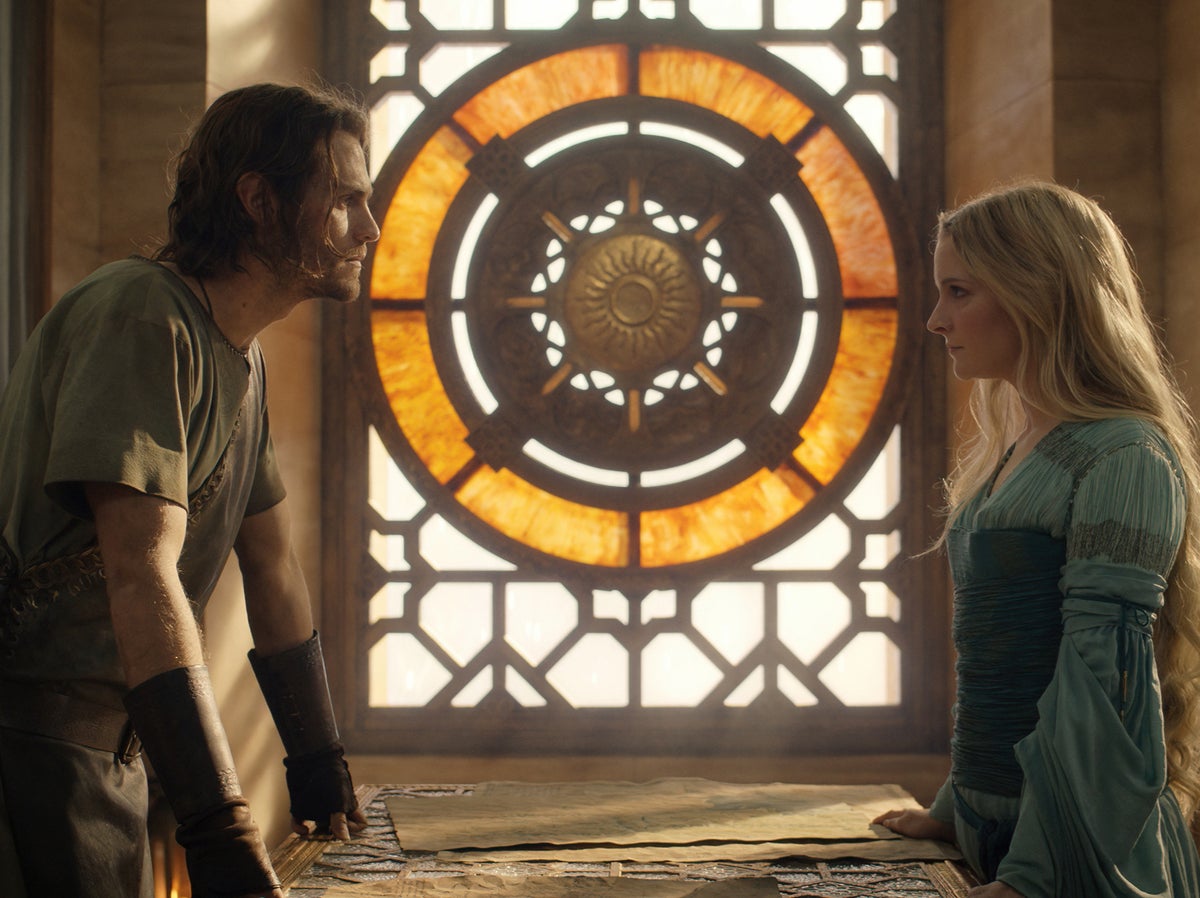 Last week’s episode of The Rings of Power raised some key questions: Would Halbrand break his oath by joining Galadriel’s journey to the Southlands? Could young Theo withstand the pull of Sauron’s blade? And what is the significance of the dwarves mining mithril? We’ve got answers to all that and more this week, and there was still time to catch up with the Harfoots too. They even sang us a song! Let’s take a look at where things are after episode five “Partings”…

The Harfoots are back, with a song in their hearts and wolves on their tails

We start again this week with the Harfoots on the road. After a brief breather to allow Nori (Markella Kavenagh) to teach The Stranger (Daniel Weyman) her migratory habits, we follow the creatures’ journeys through the kind of montage of beautiful pastoral vistas that Middle-earth is replete with. The sequence is accompanied by Poppy (Megan Richards) singing a Harfoot folk song called “This Wandering Day”. An original creation for the rings of power, It’s a stirring homage to leaving the comforts of stove and home behind to explore the unknown. Of course, there are also dangers, as the Harfoots will soon learn the hard way when they are attacked by wolves in a dark and gloomy forest. Luckily, The Stranger is there to scare off the wild beasts with a blast of his magic, injuring himself in the process but at least proving to the Harfoot elders that they were right to let him go with them. Previously, Nori had assured The Stranger that he was not a “danger” to her and her family, but a help. That might not be entirely true. She almost freezes to death when she interrupts him from tending his wound, and little do they know of the sinister, silent, white-robed trio on the stranger’s trail. Wolves might be the least of their worries.

Last week we saw the elven archer Arondir (Ismael Cruz Córdova) return to the Ostirith watchtower to deliver a message from Adar (Joseph Mawle) to the people taking refuge there: Swear allegiance or die. This week, the mass of mortals makes their decision – and it’s pretty even. (52 percent – 48 percent, no doubt). One half chooses to stay in the tower and fight behind Bronwyn (Nazanin Boniadi), even after acknowledging that she’s “not the king you’ve been waiting for” (more on him). The others trudge off to kneel before Adar, led by old pub owner Waldreg (Geoff Morrell). He soon has to prove his loyalty by killing one of his own. Crucially, Bronwyn’s teenage son Theo (Tyroe Muhafidin) voted to remain. After Arondir gives him a few archery hints, Theo turns over the mysterious black hilt that Waldreg told him was sculpted by Sauron’s own hand. There’s still hope for teenage Tearaway.

Galadriel finally sets sail – and takes Halbrand on board

So about the new king (not this one). As Bronwyn mentioned, the people of the Southlands have been waiting for one to appear for a long time. The only problem is that the rightful heir, Halbrand (Charlie Vickers) – sorry, Lord Halbrand these days – is on the other side of Arda in Númenor and has sworn a solemn oath never to return. Galadriel (Morfydd Clark) tries to convince him otherwise, but he gets nothing. “Find another head for the crown!” he tells her, but if there’s one thing we’ve learned about Galadriel, it’s that she hates taking no for an answer. She hits another punch, pointing out to Halbrand that it was his ancestors who sided with Morgoth and the Orcs, not himself. Not quite, says Halbrand, hinting that some deep and dark secrets await him at home. But when Galadriel and Queen Regent Míriel (Cynthia Addai-Robinson) set sail for Middle-earth, Lord Halbrand is right with them. Finally heading to the Southlands, you better hope these ships are as fast as they look – there are only three episodes left!

Speaking of breaking solemn vows, Elrond (Robert Aramayo) is an elf in a bind in this episode. After swearing to the dwarf prince Durin IV (Owain Arthur) only last week that under no circumstances would he reveal the existence of the mysterious ore mithril to his fellow Elves, he is forced to do so by High King Gil-galad (Benjamin Walker). It seems that Elrond was sent to Khazad-dûm under false pretenses and that Gil-galad already suspected that the dwarves had chanced upon an ore that the A-elves themselves desperately need. Celebrimbor (Charles Edwards) explains to Elrond that they need “huge amounts” of the glowing ore so that they can “saturate every last elf” with its light. Otherwise, as Elrond Durin later says, “my kind must either leave these shores by spring, or perish.” Prince Durin is delighted with this turn of events. Not only does the fate of the entire race of elves lie in his hands, he also has an excuse to try to reopen mines he had no intention of closing. He promises to help persuade his more cautious father King Durin III (Peter Mullan) into the plan, while a team of elves struggle to carry the massive dining table he wrested from King Gil-galad. All in all, Durin will think the trip to Lindon was pretty good.

The Rings of Power can be seen on Amazon Prime Video. Start your free 30-day trial today and check out Prime.

https://www.independent.co.uk/arts-entertainment/tv/reviews/lord-of-the-rings-rings-of-power-episode-5-biggest-talking-points-b2173248.html The Lord of the Rings – The Rings of Power: The Four Biggest Talking Points from Episode 5

Rings of Power Episode 5: Were these mysterious figures in white the Easterlings of Rhûn?

Lisa Marie Presley says she feels ‘judged and blamed’ over the death of her son Benjamin.