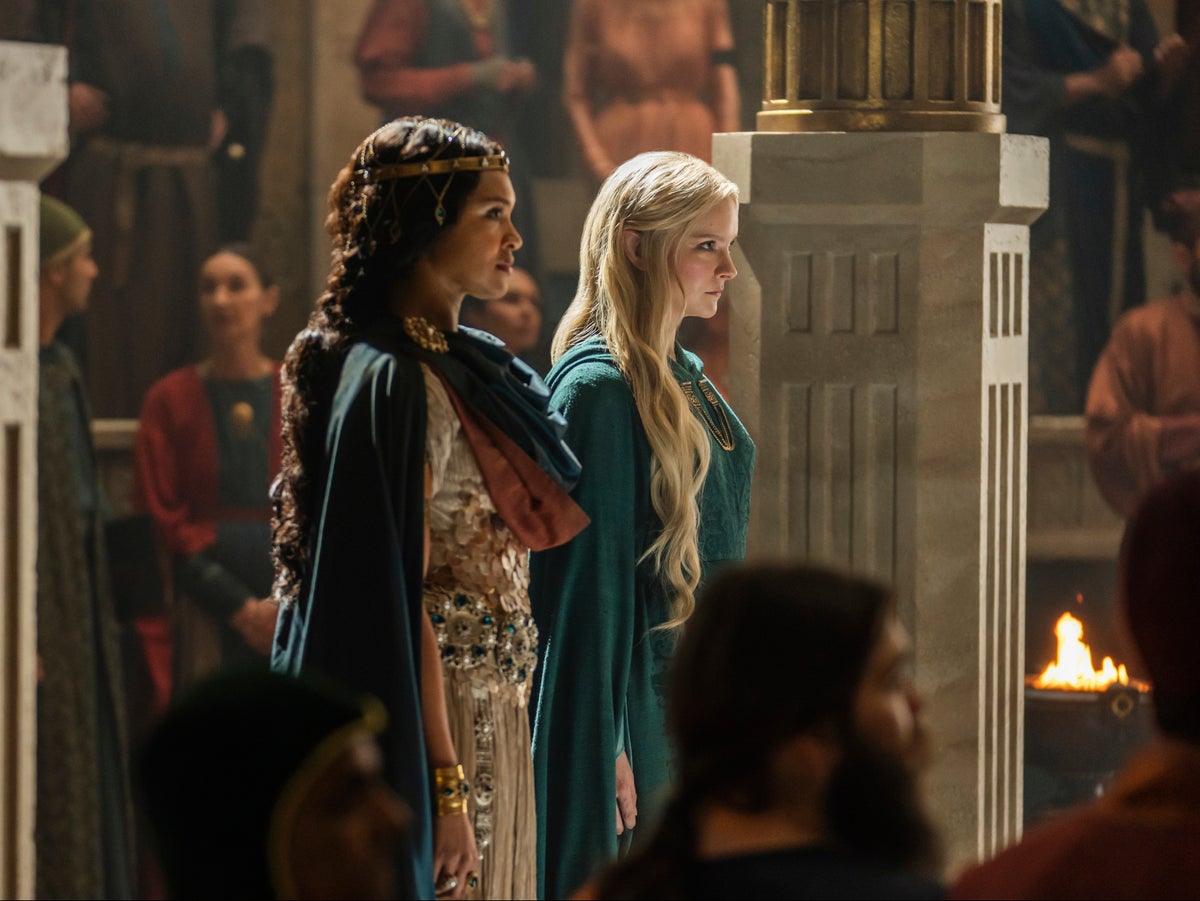 We have reached the midpoint of our journey through Middle-earth. The conclusion of this week’s episode of The Rings of Power means we’re exactly halfway through this eight-episode season. That should mean things are starting to heat up, but after a promising start to the series, the story’s development seems to have slowed to the pace of a horse in inexplicable slow-motion. For those of us still hanging on, here are the biggest questions episode four raises…

Will Halbrand take part in Galadriel’s journey to the Southlands?

Much of this episode focuses on Galadriel (Morfydd Clark) and her attempts to gather an army of Númenóreans to sail to the Southlands and fight the orcs gathered there. Her pleas to Númenor’s regent Miriel (Cynthia Addai-Robinson) to support her war against Sauron and his followers repeatedly fall on deaf ears as the monarch is determined to send her to Middle-earth alone. That is until the end of the episode when Miriel sees the leaves falling from the white tree. This, she tells her people, is symbolic of the “tears of the Valar themselves,” the gods who gave them Númenor in the first place.

Realizing that it was a mistake not to support Galadriel’s plan, Miriel changed course in the final moments of the episode, announcing that she will “personally escort the elf back to Middle-earth to aid our mortal brethren who… now be besieged in the southlands”. It was not long before the people of Númenor were clamoring to fight at their side, and Galadriel has their army at last. It is unclear whether Halbrand (Charlie Vickers) will go with them. He is out of prison and (as we learned in the last episode) Galadriel believes he is the “lost heir to the throne of the Southlands in Exile”, but so far he has firmly rejected their pleas to return to his homeland. Will the sight of a battle-ready Númenórean fleet be enough to convince him to change his mind?

Can Theo resist the temptation of Sauron?

It’s been a big week for Theo (Tyroe Muhafidin), Bronwyn’s (Nazanin Boniadi) unruly teenage son. After entire villages of the Southlands fled the invading orcs and evacuated to the safe elves’ watchtower, they soon realized they had made a rookie mistake: they had left all their food behind. Theo decides to go scavenging, despite his mother’s specific advice against it, and ends up back in a village surrounded by orcs. He eventually escapes with a little help from Arondir (Ismael Cruz Córdova), but in the process the orcs learn that Theo has come into possession of a mysterious Black Handle. Disturbingly, whenever Theo’s blood makes contact with the broken blade, a puff of black smoke transforms. The orcs desperately try to recover the weapon while Theo learns more about the mysterious object at the watchtower. “It’s not a sword,” the old pub owner tells him. “It is a power created by the hand of its master for our ancestors… have you heard of it, boy? Have you heard of Sauron?” Given what we know of the corrupting power of magical objects in Tolkienland, there are concerns about young Theo’s future.

All that glitters is not mithril

Meanwhile in Lindon, home of the elves in Middle-earth, work is in full swing on the powerful new forge that the dwarves are helping to build for Celebrimbor (Charles Edwards). Oddly enough, however, dwarf prince Durin IV (Owain Arthur) is nowhere to be seen. Celebrimbor dispatches Elrond (Robert Aramayo) to find him, and the elf is shown around by Durin’s wife, Disa (Sophia Nomvete), before finally tracking his friend to an old mine beneath Lake Mirrormere. There, Durin swears him to secrecy before revealing that the dwarves have been mining mithril, a fascinating new ore that the dwarf explains is “lighter than silk, harder than iron”. As a weapon it would be best for our proudest blades.” (You may recall in The Hobbit and Lord of the Rings, Bilbo and Frodo Baggins come into possession of a mithril mail vest, which Gandalf describes as valuable “greater than the worth of the entire Shire and all in it.”) As Durin and Elrond speak, a cataclysm strikes and the mine beneath it collapses . This leads to Durin’s father, King Durin III (Peter Mullan), ending the entire operation – but surely this won’t be the last we’ll see that glittering mithril?

Where are the Harfoots?

Unfortunately, with all the back and forth in Númenor and violence in the Southlands this week, there is no sign of the lovable Harfoots at all. Some critics of the show have suggested that The Rings of Power takes place in a fantasy world that’s overly generic, and that’s especially noticeable when the hobbit-like creatures aren’t present. Come back Nori and Poppy, all is forgiven!

The Rings of Power is available on Amazon Prime Video.Start your free 30-day trial today and check out Prime.

https://www.independent.co.uk/arts-entertainment/tv/reviews/lord-of-the-rings-rings-of-power-episode-4-biggest-talking-points-b2168208.html The Lord of the Rings – The Rings of Power: The Four Biggest Talking Points from Episode 4

Rings of Power Episode 4: How does Sauron's sword work?