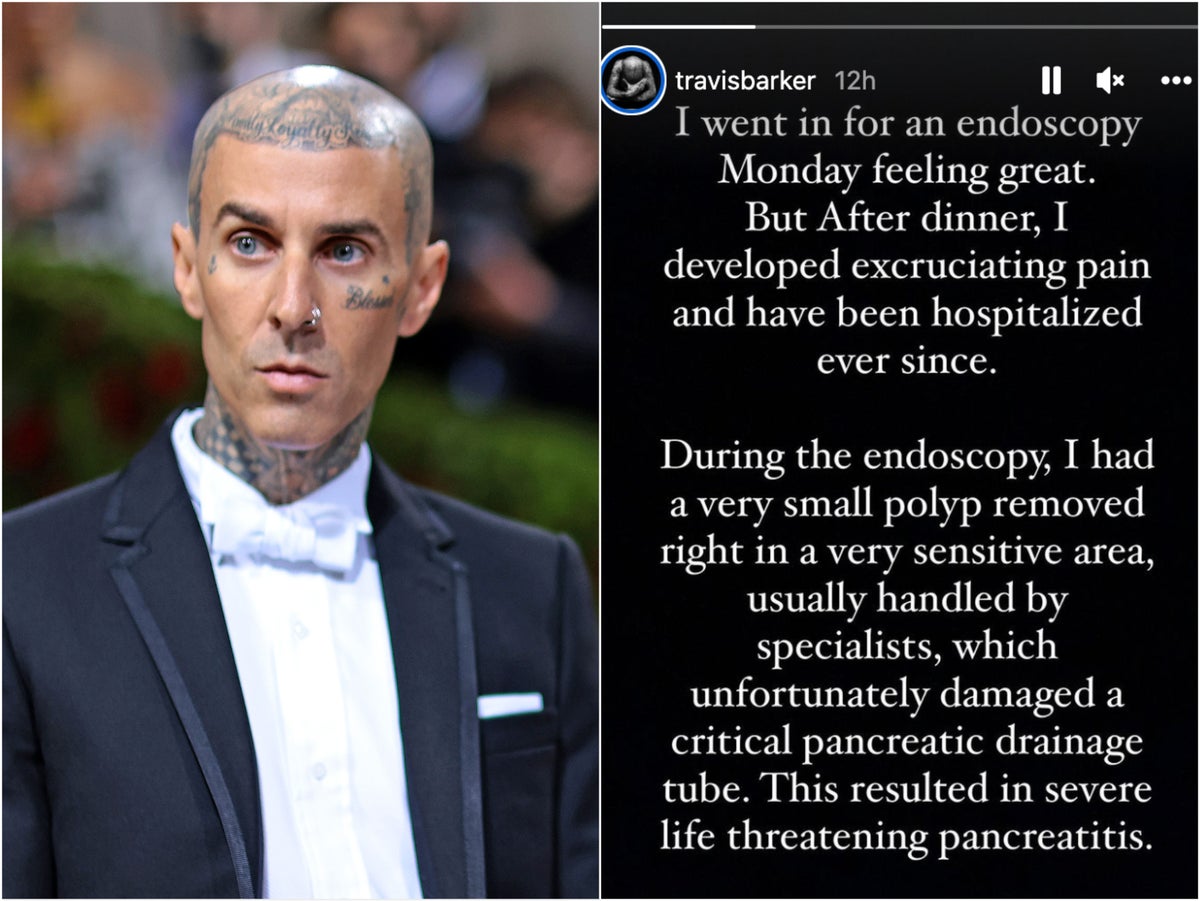 Travis Barker has revealed he was hospitalized last week after being diagnosed with “life-threatening pancreatitis”.

On Tuesday (June 28), the Blink 182 drummer was rushed to Cedars-Sinai Medical Center in Los Angeles along with his wife Kourtney Kardashian.

Barker reportedly first visited West Hills Hospital in the morning after suffering a health problem, but was then rushed to the larger hospital by ambulance. Fans shared their concerns after Barker’s 16-year-old daughter, Alabama, took to social media to ask her prayers.

On Saturday night (July 2), Barker shared an update on his health, explaining that a routine endoscopy left him with pancreatitis.

“I went for an endoscopy on Monday and felt great,” Barker wrote on Instagram Stories.

“But after dinner I got excruciating pain and have been in the hospital ever since. During the endoscopy, a very small polyp was removed directly from a very sensitive area, which is usually treated by specialists and unfortunately damaged a critical pancreatic drainage tube. This led to severe, life-threatening pancreatitis.”

He continued: “I am so very grateful that I am doing much better with the intensive treatment at the moment.”

Pancreatitis is inflammation of the pancreas, a small organ behind the stomach that helps with digestion. You can find out more about the condition here.

In her own post, his wife Kardashian described her “scary and emotional” week, writing, “Our health is everything and sometimes we take for granted how quickly it can change.

“I am so thankful to God for healing my husband, for all your prayers for him and for us, for the overwhelming outpouring of love and support. I’m so touched and grateful,” she said.

“I am so grateful to our specialists, doctors and nurses at Cedars Sinai for taking such wonderful care of my husband and I during our stay. It’s crazy how sometimes words can never really express the gratitude or the feelings I have inside.”

Kardashian also called paparazzi who were “selling pictures” who claimed to show her “on the go” while Barker was in the hospital, which the reality TV star said was weeks old.

“Really brutally uncool when I actually didn’t leave his side… Shame on you,” she wrote.

In May, Travis and Kardashian wed in a courthouse in Santa Barbara, California. They then held their main wedding celebration in Portofino, Italy.

Florida man blown up by firecrackers

Choose when and how to buy Sassenach