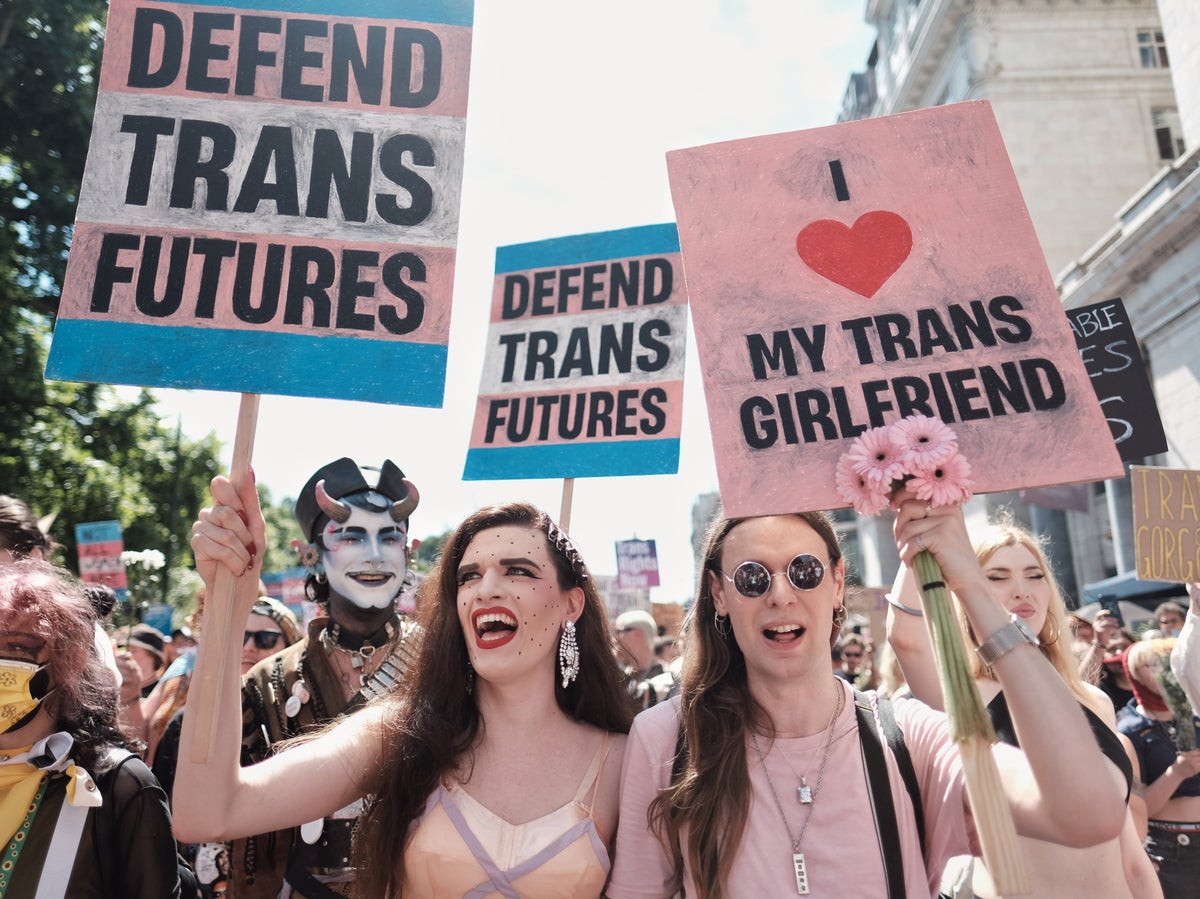 “I think many cisgender and straight people mistakenly assume that the passage of time alone equals progress, when in reality it is the direct actions, protesting and speaking out of LGBTQ+ people that have led to change.” These are the words of Oscar. On Saturday 9th July 2022 he and thousands of other trans people and allies marched through London for London Trans Pride.

“We will not have a better life without fighting for them,” agrees Chris, another protester. You join the London Trans Pride all the way from Germany. “To me, trans pride means feeling trans joy because there are many of us and we’re here to stay.”

The annual march has a lot to do this year. “In recent months, the Equality and Human Rights Commission (EHRC) has dramatically changed its position on trans rights, suddenly calling on the Scottish Government to pause its Gender Recognition Act (GRA) reforms, arguing that the UK Government reforms should delay conversion therapy for trans and intersex people,” said a spokesman for London Trans+ Pride.

“On Trans Day of Visibility, the UK Government announced that it would proceed with the ban on conversion therapy for gay people, but not for trans people: the irony has not escaped us, this is a heinous and premeditated attack… The EHRC is actively harming human rights for trans people. We deserve better: London Trans Pride calls for the abolition of EHRC. We march to demand legal recognition of non-binary, intersex and gender non-conforming people,” said the spokesman for London Trans+ Pride.

Oscar’s protest sign reads: not sure to be me. “That’s how I really feel right now,” says Oscar, “especially since the government seems to have decided not to include transgender people in their ban on conversion therapy,” he shares. “It baffles me that in 2022 anyone would think it would be acceptable to subject someone to conversion practices just because they are trans.”

I’m talking to Lorraine, a 30-year-old trans woman. “This is actually going to be my first pride march,” says Lorraine. “Having felt increasingly concerned about being trans in the UK in recent years, I want to show those outside of the trans community that there is nothing to fear, nothing to worry about, and that we really aren’t. Some think we’re monsters.”

Lorraine is referring to anti-trans activists who are the reason the government largely fails to recognize transgender rights. Anti-trans campaigns in the UK are overwhelmingly led by small groups calling themselves ‘gender feminists’, made up mostly of cisgender people.

Oscar’s partner Ellie is a cisgender woman who is marching to support Oscar and other beloved trans people and to show their solidarity with anti-trans groups. “As the cis partner of a transgender man, it’s shocking to see people talking about transgender people, especially trans women. That there are multiple groups based on prejudice against them is deeply false and should be challenged head-on at every opportunity — these people don’t speak for me or any of the other women in my life,” says Ellie.

“My life is all the richer for the transgender people in it, not only for my partner Oscar, but also for my friends, colleagues and others I look up to,” she says.

Oscar feels the same way. “It’s important to me to be a visible part of the trans community and to state publicly that I’m proud to be trans,” he says.

“It’s about sharing knowledge, pain and joy. It’s about celebrating and seeing yourself and feeling seen and celebrated,” says Chris. “It’s about being visible and taking care of each other in that visibility, just like we do in our everyday lives. It’s also about creating a space for sharing emotions and experiences, and acknowledging different perspectives within the trans community that go beyond my own experience.”

This year, London Trans+ Pride aims to “celebrate the memory of trans life and support the next generation of trans revolutionaries”.

“Pride began as an uproar and we shouldn’t forget how much we owe to trans parents of color like Sylvia Rivera and Marsha P. Johnson, who took to the streets before us and stood up to violence, including within the lesbian and gay rights movement,” she says Chris.

“We will fight for justice – until none of us are imprisoned, denied free access to good health care and care in general, denied good nutritional housing, harassed and injured in the streets. Because we are human and another world is possible.” Chris says. “We are unstoppable. I want more than rights, I want liberation and justice.”