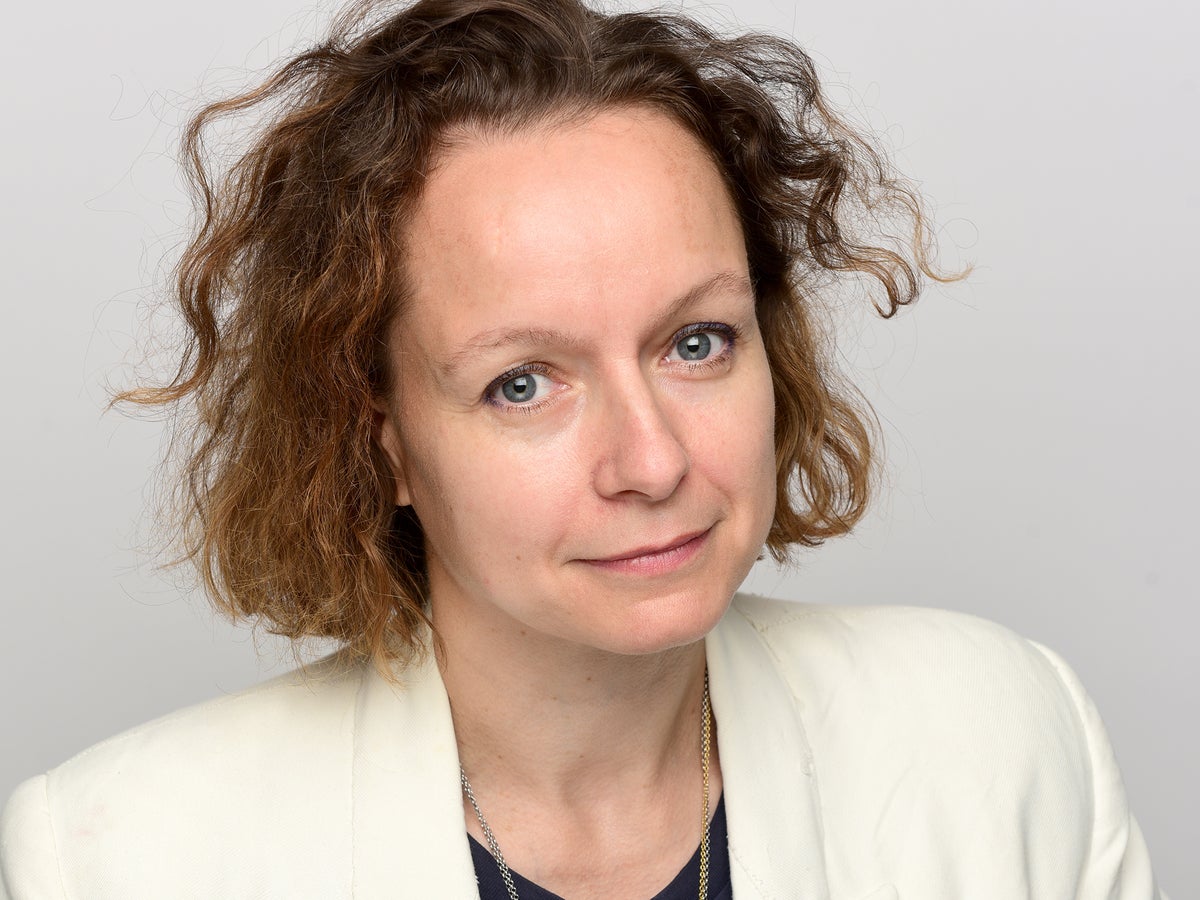 I don’t think I have any more power now than I did when I was 22,” says Samantha Morton. “And I had no power then.”

It’s a startling statement to digest after seeing the 45-year-old’s royal performance The Snake Queen, in which she wields power with shockingly easy control and a cruel grin while heads roll at her command. She plays Catherine de Medici, the Italian merchant’s daughter who became Queen of France in 1547 and gradually gained a reputation as one of the most brutal and calculating European rulers of the time.

The fresh and witty feminism of the new Starz series underscores the misogynist myths the story has spun around the “Medici Bitch” (who wasn’t conventionally pretty or submissive and didn’t father a child in the first decade of their marriage). But it doesn’t patronize its heroine by trying to reinvent her as a misunderstood candy.

“It’s more complex than that,” says the Nottingham-born Golden Globe winner. “From the day she was born, everyone was out to kill her. She was orphaned as a baby [her parents died of syphilis] and taken in by her grandmother, who died then too. She grew up in a convent in Italy, where her family name was mud. She came to France when she was 14 and was not welcome there either, for various reasons. Their survival depended on their cleverness and their ability to watch and listen.”

Morton pauses. “People may be drawn to this show that it’s costume drama, but the deeper they delve into the darkness, the more they’ll realize it’s more like a series.” successor or a movie like Goodfellas.”

It was in costume dramas that Morton made his name. She completed small youth roles in ITV series soldier soldier and blessing to a greater extent in Andrew Davies’ 1996 adaptation Emma and starred in Robert Young’s 1997 adaptation jane eyre. American directors were concerned with the self-contained intelligence behind her gray-blue gaze. Steven Spielberg cast her as a bald psychic kidnapped by Tom Cruise minority report (2002) and was nominated for an Oscar In America the following year. But she was back in a corset in 2004, starring Johnny Depp and John Malkovich The free spirit and as Mary Queen of Scots in Elisabeth: The golden age (2006). That same year, she became known for taking on darker roles, playing the Moors killer Myra Hindley in the TV movie Langford, for which she received a Bafta nomination. Although families of Hindley’s victims have criticized her for paying more attention to the killer, Morton said she feels it is her duty as a performer to “address issues that we fear.” Most recently, she chilled out as the villainous zombie alpha in the Walking Dead.

The Snake QueenThe author of , Justin Haythe, told me he thought Morton was “a genius, one of the greatest actors of her generation.” He says that Catherine could only be impersonated by someone who could emulate her inherent mystery. “I think there’s something deep about Sam that makes you look and look and look. Sam’s kind of an outsider. She is always unique.”

Spoken to me via video link, an off-duty Morton looks almost as stately as her character, draped in a huge robe with a stiffly pulled-up white collar resembling a ruff. “I’m wearing a dress underneath,” she grins, giving me a quick peek inside the dress, “but the air conditioning in this hotel room is freezing!” But she also uses the extra layer as comfort and armor, if I look at the parallels between her own story and that of her character. She pulls it tightly around her while admitting that “there are some obvious similarities, yes… But I don’t wear any of that. It could be in my DNA somewhere. But it’s not like I’m like, mmmm, I remember…”

Born in 1977, Morton is the third child of a couple who divorced in 1979. She lived with her alcoholic father until she was eight years old when she was tried because neither of her parents could care for her and her siblings. She has described how her father would pack lettuce sandwiches in a Sunblest bag and send them away for whole days, telling her to “come when it’s dark”. Her mother was involved in an abusive relationship with her second husband, which made it impossible for Morton to live with her again. So she spent the next nine years in foster families and children’s homes: an experience she processed in her Bafta-winning directorial debut The unloved (2009).

“Catherine de Medici was an orphan,” says Morton. “I wasn’t an orphan, but I didn’t have access to my parents in a traditional way.” She admits that she’s referring to Catherine’s struggle to learn the rules of various courts, as her character was influenced by the hypocrisy of Catholic Rome (where she shown spitting in her uncle the Pope’s drink, played by a scheming Charles Dance) rebuffs the more overt licentiousness of the French court. “If you had a lot of different foster families with different religions, they eat differently in different houses. Different households have different rules… It’s all kind of… well, it can be challenging.”

Like Catherine, Morton was an observer. “As a child,” she continued Desert Island Discs 2020: “I used to watch people on the bus – how they smoke their cigarettes, how they move their heads, how they listen, how they get off the bus and walk down the street. Did you just have any news, how was your morning? Are you happy? Are they sad? Why do they have their hands in their pockets? I just keep asking questions about people.”

Morton believes it was “Defiance” that drove Catherine. “She has a calling. She knows she’s different, she knows she’s special. She’s bright. She was a mathematician, an astronomer, she designed incredible gardens. She had visions and a relationship with Nostrodamus…”

Although not particularly religious, Catherine de Medici was superstitious from childhood. She took an astronomer to France and as she struggled to conceive she is said to have tried every trick imaginable, including drinking mule urine and placing cow dung and deer antlers on her “fountain of life”. After ten years of public scrutiny on her fertility, she gave birth to a son named Francis in 1544, who was followed by nine other children.

Morton tells me that when Catherine’s husband died, “she was the first queen to wear black in mourning. I did not know that! I thought it started centuries later with Queen Victoria. People despised Catherine because white was the traditional mourning color in France at the time, but she followed her own family tradition.”

While other historical dramas indulge in historical fashion for their own sake, The Snake Queen shows how clothing was used as a power play. “We still see that with Kim Kardashian today,” says Morton. “Or someone like Meghan Markle who makes a mark by wearing red. Mary Queen of Scots wore red when she was murdered.” (Mary wore a black dress to her execution, but it was removed by her servants before her death to reveal a crimson velvet petticoat, red sleeves, and a crimson-brown satin bodice—red is both the color of blood and the liturgical color of martyrdom in the Catholic Church.)

While Morton admires Catherine’s strategic mind, she admits she found her fixation on revenge “more difficult”. I push her to it, because in her Desert Island Discs In an interview, she described how – under the influence of drugs, when she was 14 – she threatened to kill another girl with a knife because she believed the other child was a bully who had pimped a nine-year-old boy. The incident resulted in an 18-week prison sentence in a care center. “I was embarrassed,” she told the BBC’s Lauren Laverne. “And I’m sorry for her. We’ve all been abused. She was a child herself. Nobody really took care of us. We rioted in this house because they locked the fridges at night. We weren’t sure.”

I wonder if she’s ignoring that now when she tells me, “Without sounding like an idiot, I honestly can’t say I’ve ever sought revenge. I have felt absolute horror and sadness and confusion when people do terrible things, either to society or to each other. I’ve never had this desire to take revenge personally. I’ve always believed that everything comes out in the wash, that you have to be careful what you sow.”

But I feel the truth of her belief in “the forgiveness I am capable of.” No one has ever been charged with “violence, sexual abuse, torture…” that she experienced growing up and she has never pressed charges. Today she is keen to distinguish between Catherine’s love of revenge and her own desire for justice. “I’ve always been someone who wants that.”

But it’s not the abusers of the past that make Morton angry when we talk. They are the bosses of Channel 4 of the present. That’s what she tells me The unloved was the first in a trilogy of films she wrote about the nursing system. But she can’t even get the Movie 4 people to read the scripts of the second two. “starlings It involves leaving foster care and being placed in a homeless shelter. Then my third film is from the perspective of a parent who has a child taken away and is fighting against social services. This means pamela and it’s based on my mother. If people read the scripts and don’t like them, I’d say fair dos. But there is no interest. Film 4 just wants to do comedy and movies with Shane Meadows.”

The topic should be brought to the fore. In 2020, children’s charity Barnardo’s warned of a “state of emergency” in the care system, while local government sources warned a number of factors could be converging to trigger a new crisis. According to an analysis by the Social Market Foundation (SMF), the increasing poverty as a result of the pandemic and the cost of living crisis lead experts to expect a recruitment deficit of around 25,000 foster families by 2026.

Morton shakes his head at her powerlessness to publicize the issue. She says it’s not like that The unloved was a worthy film about social issues that failed to attract viewers. “We won a Bafta! We have the highest viewership ever for Channel 4 [two million].” When I tell her that she might need to channel some Medici skills to get her scripts to the top of the stack, she emphatically agrees.

“Yes!” she excited. “Yes, I want to. But that’s why I’m talking to you and maybe I can get her to do something!”

https://www.independent.co.uk/arts-entertainment/tv/features/samantha-morton-interview-serpent-queen-b2162864.html Interview with Samantha Morton: “I’ve never sought revenge – you have to be careful what you sow”

Merriam-Webster adds "pumpkin spice" and "yeet" to the dictionary