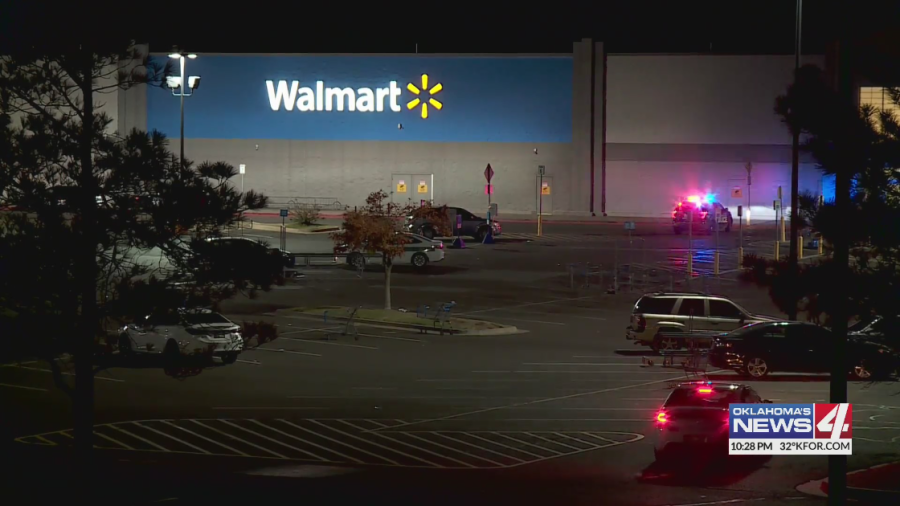 OKLAHOMA CITY (KFOR) – An off-duty police officer involved in a shooting while working as a security guard at a local Walmart reflected on the night he found his life on the line while staring down the barrel of a gun.

Officer Murray said he was off duty Nov. 20 and was working as a security guard for the Walmart on Belle Isle Blvd. in Oklahoma City.

That’s when Oklahoma City police said 43-year-old Chartez Chappell tried to leave the store without paying for a bicycle, while at the same time making a small purchase for food and supplies. Chappell was then ended by employees then security.

“It turned for the worse,” Murray said. “He was not compliant. He wasn’t following my commands.”

Inside the store, a scuffle between the two broke out.

Murray said he tasered Chappell, sending him to the ground face first.

When Murray went to cuff the suspect, Chappell turned around with a gun. Murray was staring straight down the barrel.

“What was going through your mind?” KFOR asked him.

Police: Drive-by shooting suspicious shot at home with children inside

He didn’t know it at the time, but Murray said Chappell still had a holster on the gun, stopping Chappell from being able to pull the trigger.

While taking off, Chappell fired three shots. Murray was hit in the hand-cuff holster on his belt.

“It was like someone put the hot metal and touched it through your clothes and it kind of burned. I knew I felt heat. I knew I was shot,” Murray said.

After patting himself down and not finding any blood, Murray went out searching for the suspect.

“I stayed in the low areas between cars to make sure I could still see his every move because I heard sirens on the way,” he said.

Chappell was arrested later at a nearby Chili’s, with a broken cigarette in his mouth.

“I know that anything can happen at a given time. I just got to prepare for it. But, I stay blessed by the Lord and my family knows what I do,” he said.

According to a probable cause affidavit, Chappell is facing charges of shooting with intent to kill.

https://kfor.com/news/local/i-had-to-get-out-of-the-way-off-duty-officer-talks-about-chaotic-shooting-at-walmart/ “I had to get out of the way,” Off-duty officer talks about chaotic shooting at Walmart

Addictive Wikipedia game that will keep you hooked for hours - can you beat our score?

Like the US, Colorado added more Republicans last year