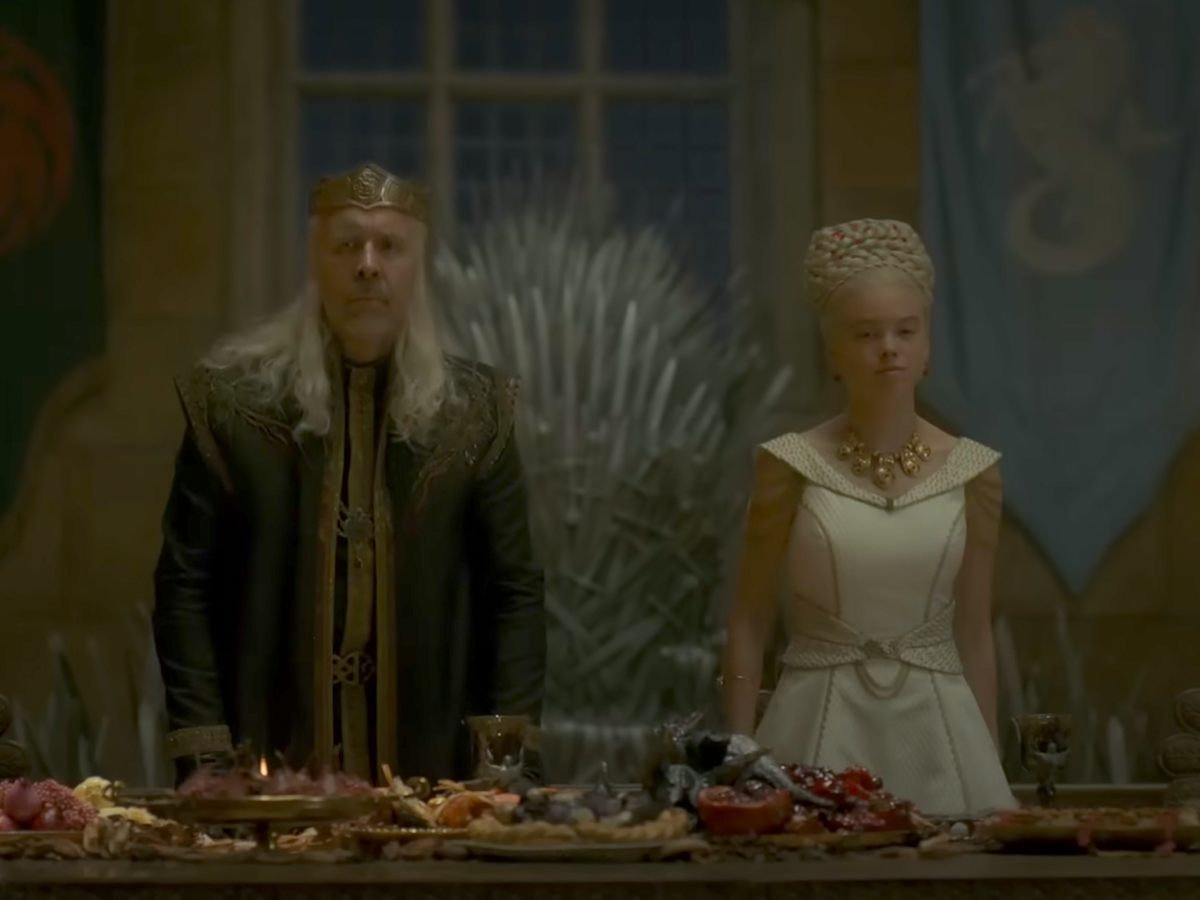 How soon can an era end? Whether it’s Charlie Sheen who is being quietly traded for Ashton Kutcher Two and a half menor Henry Blake’s plane crashing over the Sea of ​​Japan MASH , there is nothing marking televisual milestones like changes to the dramatis personae. Well, this week’s episode We Light the Way feels like the end of an era house of the dragon changes its cast, only five episodes in. Say goodbye to young Rhaenyra and young Alicent: next time you see them they will all be grown.

But for now everything is as we left it. Daemon (Matt Smith) has been banished to the Vale, where he is greeted by his surprisingly attractive wife (what was all his complaints about?), who is less than pleased to see him. “Have you finally come to consummate our marriage?” prompts Lady Rhea (Rachel Redford). “The sheep of the Vale may be ready, even if I’m not.” She might begin to regret that snipe when Daemon picks up a large rock. game of Thrones was often an exercise in seeing what characters can come back from: Jaime, redeemed after pushing Bran out of a window; The dog, a moral pillar after years of plunder. But can Daemon ever come back from his wife’s murder if she only had 20 seconds of screen time?

Meanwhile, Rhaenyra (Milly Alcock) and her father, King Viserys (Paddy Considine), are en route to Driftmark to cement their engagement to Laenor Velaryon (Theo Nate). Viserys, growing weaker and weaker, can’t go anywhere without looking like he’s about to disintegrate before the Ark of the Covenant like a Nazi. But his desire to consolidate power has grown. “Dragons will rule the Seven Kingdoms for the next hundred years, just as they have for the last few years,” he tells Lord Corlys (Steve Toussaint).

The problem, it turns out, is that young Laenor prefers the company of men, while Rhaenyra still lusts after the clothed hunk of human flesh guarding her (Fabien Frankel’s Ser Criston Cole) and her seedy uncle. “I prefer roast duck to goose,” Rhaenyra says to her fiancé. “It’s not a lack of effort,” he replies sadly. “There are those who like goose very well.” At the end of this cryptic, poultry-based discussion, they reach a compromise. “We do our duty,” Rhaenyra proclaims pragmatically, “and when it is done, each of us dines as we see fit.”

The real problem for House Velaryon is Baby Aegon in King’s Landing. “We’re putting our son in danger,” says Eve Best’s Princess Rhaenys of her own son, Leanor, who will soon be King Consort. “Knives will come out.” Nobody – maybe not even Viserys himself – believes that the king has enough power to easily pass the throne to his daughter. He’s a bright king (and we’re holding him tight), but his belief in the sexless primacy of primogeniture will cause problems. Not least with his wife Alicent (Emily Carey). After her father (Rhys Ifans) is banished from the court, she begins to realize that her short, plump Aegon cannot survive if Rhaenyra takes the throne. And unfortunately the opposite is also true.

The new Hand, Ser Lyonel Strong (Gavin Spokes), has a son, Larys (Matthew Needham), who we’ve never met but who enters this episode with such Machiavellian intent that it seems like he’s becoming a key player will. Through Larys, Alicent learns that Rhaenyra may have lied about her virtue – a lie that led Alicent to choose her best friend over her father – and she responds by confronting Ser Criston Cole. Already reduced to a bubbling wreck by Rhaenyra’s rejection of his proposal, Cole (“You want me to be your whore?” he replies, lower lip trembling), and he immediately yields to Alicent’s gentle interrogation. “My oath was broken, I dishonored myself,” he proclaims, along with a request to kill him. But Alicent keeps learning how the game is played and knows that debtors make good allies.

Could have been a loser kid…

It’s finally time for the wedding festivities to begin. Daemon, fresh off his uxoricide fit, crashes the celebrations. His arrival does not go down well with either the king or his late wife’s uncle. “In the Vale, men must answer for their crimes,” declares Ser Gerold Royce (Owen Oakeshott) solemnly, “even Targaryens.” But Daemon isn’t the biggest distraction at the feast: Alicent is late, provocatively clad in the green of House Hightower , and interrupts her husband’s speech. Gone, it seems, is the meek girl who gave in to the king’s obsession with a model village.

But the biggest disruption of all is reserved for a battle between Ser Joffrey Lonmouth (Solly McLeod), “the Knight of Kisses” and lover of Laenor Velaryon, and Ser Criston. The former remains a bloody mush (linked to Westeros’ most gruesome downfalls), sealing Ser Criston’s fate as an outcast and robbing Laenor of any chance of happiness. In the final moments of the episode, a miserable looking Laenor marries his Targaryen princess before the king collapses after licking blood all evening. An era is ending, but how soon will the new one begin?

https://www.independent.co.uk/arts-entertainment/tv/reviews/house-of-the-dragon-talking-points-episode-5-b2170420.html House of the Dragon: The biggest talking points from a Rhaenyra’s marriage to Alicent’s dramatic entrance

Flooding from Hurricane Fiona destroys a bridge in Puerto Rico

Critics’ Choice Awards 2022: Everything we know