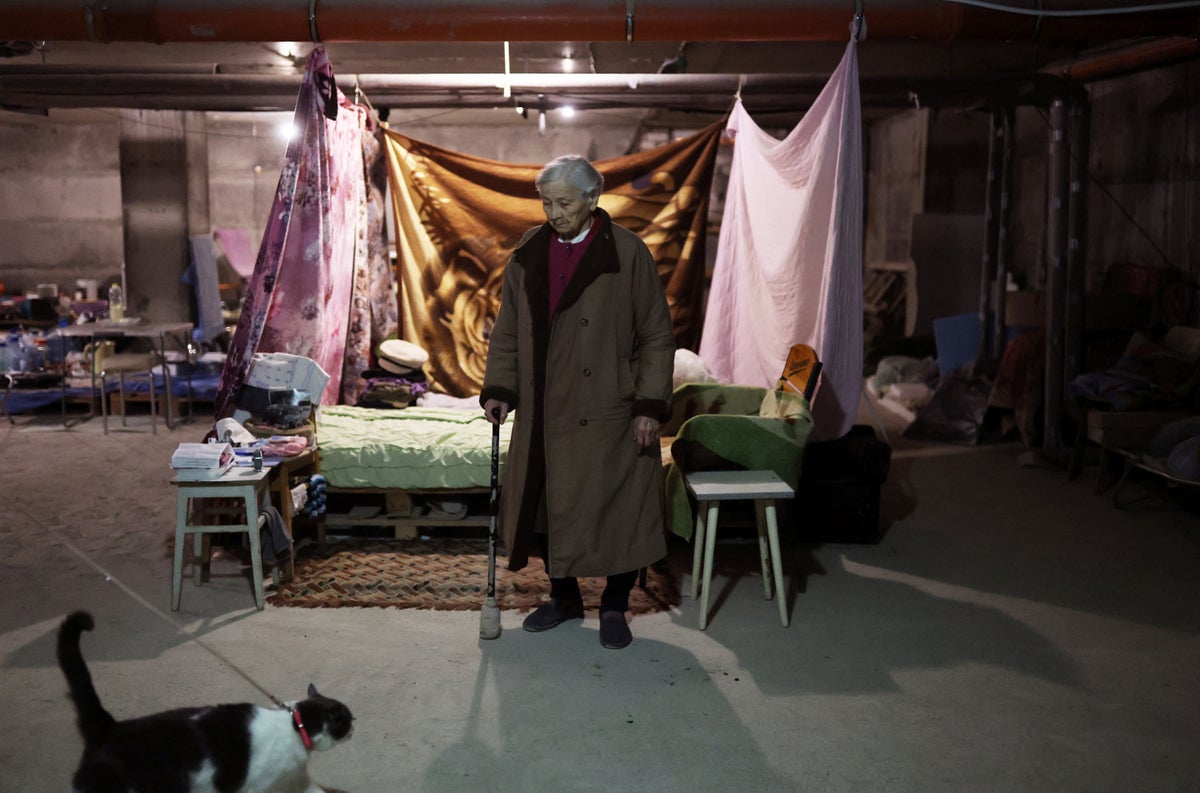 After surviving World War II, Maria Nikolaevna led a busy and fulfilling life, raising two children, working as an engineer in the Soviet aerospace industry, and cultivating a beautiful garden at the family home in the Ukrainian city of Kharkiv.

As she grew old and her husband Vasilii Emelianovich died, her horizons narrowed to the confines of her apartment on the second floor, the view from the window of children playing on the swings and visits from her daughter who lived nearby.

When war returned this year and bombs hit her building after the Russian invasion of Ukraine, Maria’s world continued to shrink — to the confines of a city-wide basement.

For four months, 92-year-old Maria has been living underground with her daughter, son-in-law and house cat. She gets her only glimpse of natural light when seated in a doorway at the bottom of a staircase that leads outside to the street.

Kharkiv – Ukraine’s second-largest city in the northeast near the Russian border – withstood a Russian attack that reached its outskirts for the first two months of the invasion, but has been shelled almost daily for the past month after a period of relative calm.

Since both houses are uninhabitable, the family lives in the basement of a friend’s apartment block in Limbo.

Maria suffers from mobility issues, progressive memory loss, and confusion that has worsened since her home was attacked.

“She has forgotten what the city looks like, she is confused and does not know where to go, what to do, how to lie down, how to sleep, how to hide,” said her daughter Natalya.

“She doesn’t hear well, so we have to write things down. It was very difficult – still is – but we found a way.”

Natalya’s home was in one of the most heavily bombed areas of Kharkiv, and she believed her mother would be safer in her own suburb eight miles away. She arranged for neighbors to bring food to Maria and check on her.

However, one night a neighbor called to say that there had been an explosion next to Maria’s apartment and the electricity had been cut. She managed to get through to her mother, who burst into tears as she tried to dress in her pitch-black apartment.

Natalya’s husband Fedor found a taxi driver willing to traverse the besieged city to pick up Maria and the few belongings they could take with them.

“The cab driver picked her up, carried her downstairs and sped across town very quickly to get her to safety,” said Natalia, who declined to give her last name. “She can no longer live without us because it has affected her health.”

War is nothing new for Maria. As a girl, her family had to house a German officer during the occupation of Ukraine in World War II. The man she would marry fought in that war.

Maria and her husband were from the same village in the Poltava region, but met after the war in nearby Kharkiv, where they attended night school, shared a desk, and fell in love.

Subsequently, Maria worked as an engineer at the state-owned FED factory in Kharkiv, which produced parts for aerospace.

“Because she is a Soviet-era person and worked like a Soviet person, she received the maximum amount of money as an engineer,” her daughter said.

The couple got married, had a son and a daughter, and bought an apartment with a garden and a motorbike. “They left the hard times behind,” Natalya recalls.

Today, with her memory fading, Maria spends her time reading dog-eared magazines and rearranging her husband’s medals, among the few things Fedor saved while fleeing their home.

They serve as a talisman: a physical reminder of their family’s place in history. These include the Order of the Patriotic War for his involvement in Soviet operations against the Germans and a medal for fighting Japan at the end of the war.

In the basement, Maria sleeps on a mattress on wooden pallets in a makeshift bedroom separated by three cheap fleece blankets.

Wrapped up in a fleece and thick-collared jacket against the subterranean cold, she lives for WhatsApp calls from her granddaughter Masha, 31, who lives in New York.

When she called, Maria asked her confused granddaughter if there was shooting where she lived.

Laughing, Natalya threw in: “No, mom, it’s good there, it’s warm and calm. she [Masha] wants to take us all there.”

As for the future, the family has no answers, only questions, Fedor said.

“When will this war end? And who does it depend on? On politicians? To us? At the military? Because it is unacceptable in our time, it is cruelty. That my mother-in-law and other old people who are 95 or 97 years old should end their lives in such conditions. The sooner it ends the better.”

https://www.independent.co.uk/arts-entertainment/photography/ukraine-russia-war-kharkiv-basement-grandmother-b2143146.html Grandmother lives in a basement when the war between Ukraine and Russia threatens her hometown of Kharkiv