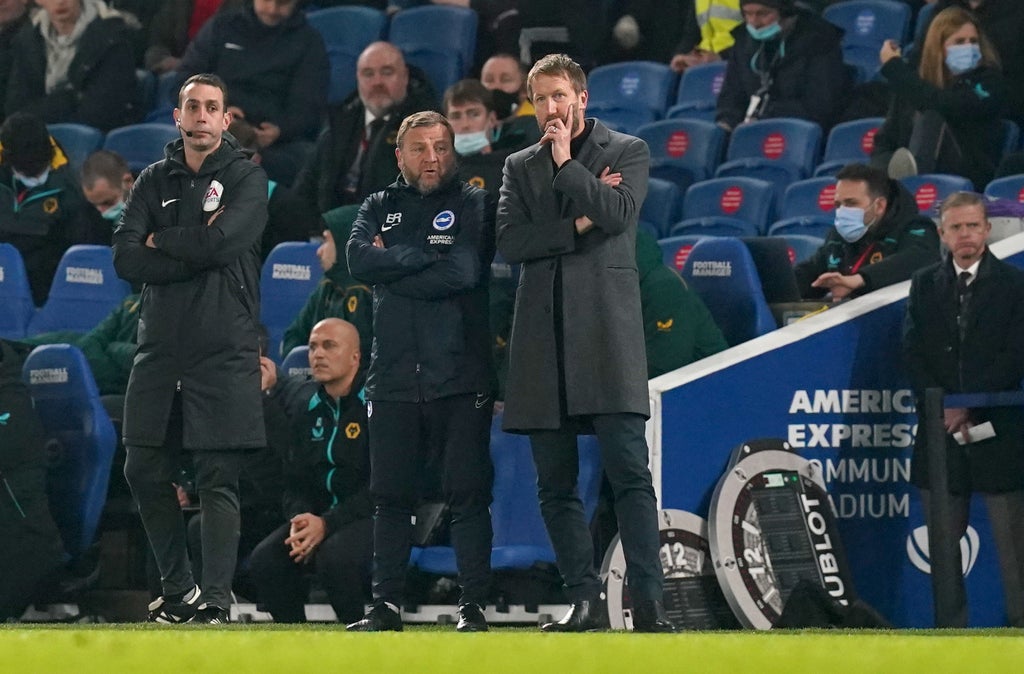 Brighton owner Graham Potter believe it will be difficult for Premier League continuing with the current trend of only a handful of games deemed worthy of postponement due to coronavirus infection among players.

Potter reveals Albion was unsuccessful in their request for Wednesday night’s clash with Wolf – 0-1 loss – rearranged following the injury and Covid-19 crisis at the club.

The depleted Seagulls have been without a host of influential players for the game, with the top scorer Neal Maupay and Pascal Synthesize the latest men to join the growing list of absentees.

Brighton’s scheduled meeting with Tottenham on Sunday has been postponed due to Covid outbreak at the north London club, while Brentford’s game against Manchester United and Watford’s trip to Burnley were postponed under similar circumstances for Tuesday and Wednesday respectively.

“We ask questions because of our situation,” he said of the possibility of a postponement.

“You really don’t have time to be frustrated (by being rejected). It’s about preparing the team, preparing for the game.”

Talking about the apparent inconsistency in decision making, he continued: “You obviously have to think that everyone is doing things with the best of intentions.

“There will be disappointment with that.

“It would have been better if it was more transparent but at the same time you are talking about medical information so I don’t know how transparent it can be.

“I think the path we’re on, I’m not sure how long we can stay on it.

“We all want football to go on, we want life to go on as best we can but obviously health is the most important thing.

“We’ve had some issues ourselves, and this week was a bit worried about the speed at which we were impacted.

“If that continues then we will have to think seriously (about the suspension of action).”

Brighton’s winless streak in the top flight extended to a club record 11 games after Romain Saiss’ first-half volley delivered a well-deserved victory for the visitors.

Seagulls midfielder Enock Mwepu missed a golden opportunity to equalize right after the opening goal but the home team played poorly and could lose with a much larger margin.

Marcal and Saiss each defeated Wanderers after the reboot, while Daniel Podence squandered two stellar opportunities to bring back daylight for the visitors.

The narrow win lifts Wolves to eighth, with the exhausted Seagulls dropping to 13th ahead of Saturday’s trip to Manchester United.

Talking about the three-month run without success, Potter said: “There are always concerns when you don’t win and we have to deal with that statistic.

“We had a lot of draws during that time. We had some good performances and some good games where we could have won but we didn’t and you have to face the facts.

“We haven’t won in a while and we have to deal with it.”

Saiss’ fine finish was Wolves’ first in five league games and was enough to earn their first success in that period.

“And Saiss, that’s why people know him as Maldini from Morocco. He scored one goal, he could score another at the start of the second half.

“We worked hard on that part of the game: the way we defended the pieces, the way we attacked with the pieces. Credit to my staff, they are working hard in those situations.

“It was a beautiful goal and I am very happy.”