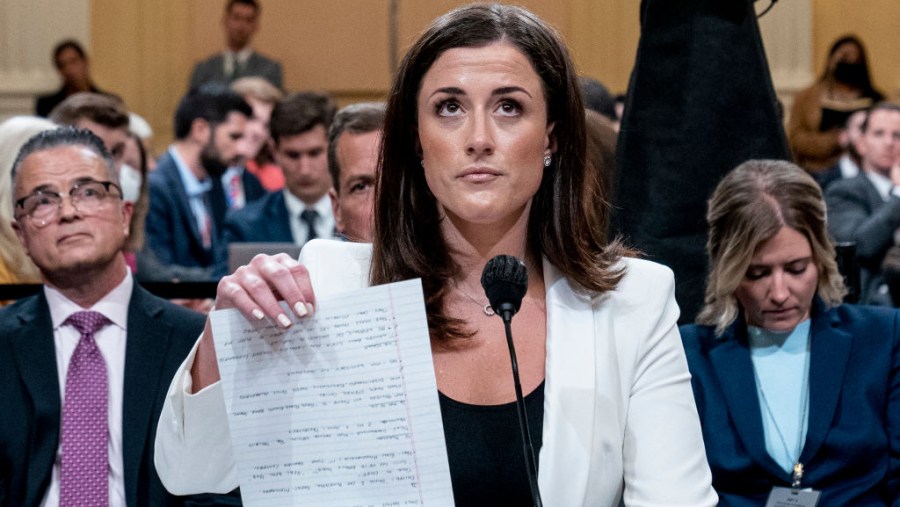 (The Hill) — Former White House staffer Cassidy Hutchinson testified Tuesday that former President Trump and his former chief of staff Mark Meadows were told that attendees at a Jan. 6, 2021 rally had guns and that Trump about it frustrated, those with guns were turned away.

Hutchinson, a former top adviser to Meadows, told the House committee investigating the Jan. 6 riots that Trump was “angry” that the ellipse near the White House didn’t line up with the electoral college on the morning of the certification Capacity for a rally is filled.

“I was close to a conversation where I heard the President say something like, ‘I don’t give a damn that they have guns. You are not here to hurt me. Take away the damn magazines,’” Hutchinson testified.

Hutchinson was referring to the magnetometers the Secret Service uses to search for weapons.


Her testimony of Trump’s frustration and calls to suspend the Secret Service began with a statement that former Deputy Chief of Staff Tony Ornato had informed both Meadows and Trump that some of those attending the January 6 rally were carrying guns .

Hutchinson said Meadows didn’t look up from his phone when briefed on the security situation at the rally.

Rep. Liz Cheney (R-Wyo.) also introduced audio of law enforcement radio transmissions ahead of the Jan. 6 rally at the Ellipse. Officials can be heard relaying reports from participants with AR-15 rifles and Glock pistols. The committee learned that brass knuckles, knives, tasers and other weapons were confiscated from some participants after passing the magnetometers.


“President Trump was aware that some of the individuals in the crowd were armed and wearing body armor. And here’s what President Trump ordered the crowd to do,” Cheney said, introducing a clip of Trump telling the crowd Jan. 6, “We’re going down to the Capitol.”

Mark Hoppus says he ‘accidentally’ shares he has cancer

Here’s where you can buy gas for $2.69 in Colorado, plus 9 other low prices statewide