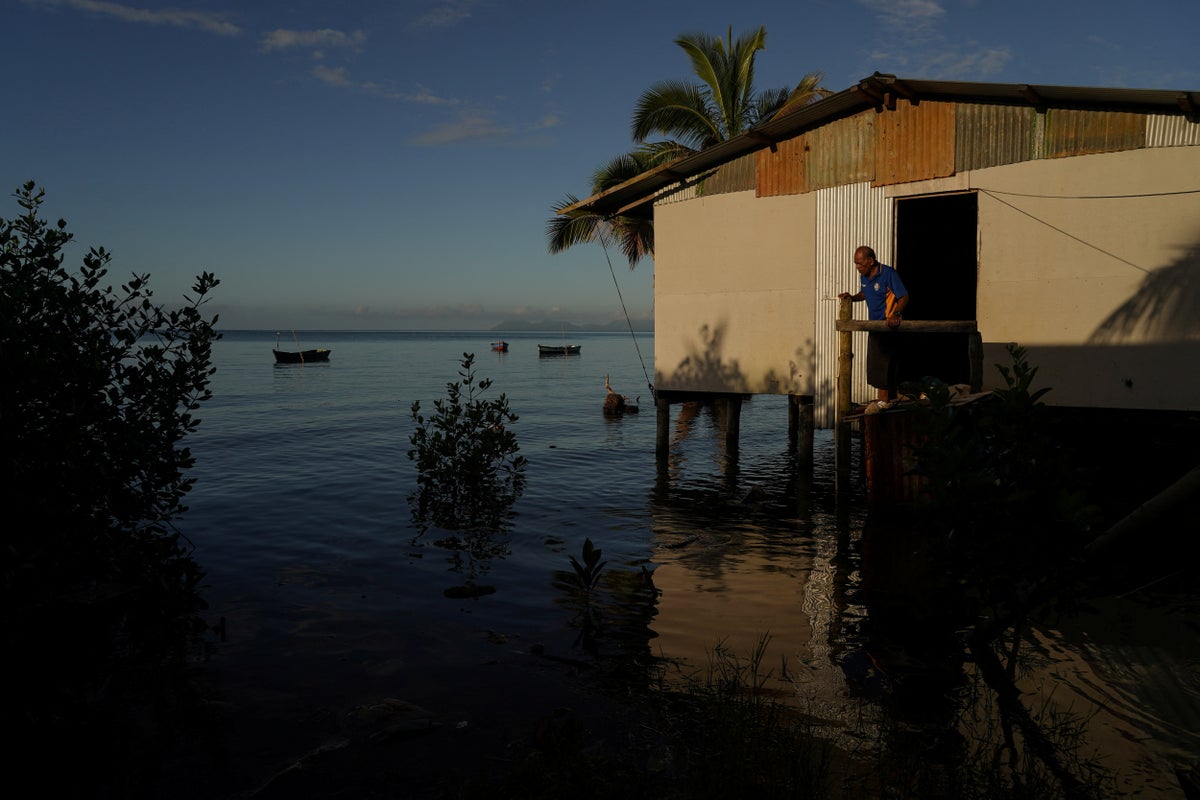 Boats moor next to Living Rooms on Fiji’s Serua Island, where high tide water breaches the seawall and pours into the village. Wooden planks stretch between some houses, forming makeshift walkways, while salt water floods the gardens.

The village elders always believed they would die here on valuable land where their chiefs are buried.

But with the community unable to adjust to the rising Pacific Ocean, the 80 villagers face the painful decision of whether to relocate.

Semisi Madanawa, who raises three children wading through playgrounds, says facing flooding, erosion and extreme weather conditions, the village must relocate to Fiji’s main island to secure a future for the next generation.

Village elders resist, wondering if land reclamation could keep the sea from taking over Serua Island’s homes and ancestral tombs, he says.

“It takes time for an idea to settle in the hearts of us humans so that we can accept the changes that are coming,” says Mr. Madanawa, 38. “Climate change is happening and we have to make a choice.”

Serua Island is one of many coastal villages making difficult decisions about their future and seeking government support for expensive adaptation or relocation projects, Fiji government officials say.

The leaders of 15 low-lying Pacific island nations declared climate change their “top existential threat” at a summit in Fiji’s capital Suva in mid-July.

Faced with some of the most immediate impacts of climate change, they want the developed nations, which contribute most to global warming, not only to curb their emissions, but also to pay for the actions islanders must take to keep their populations safe from rising sea levels protection. The push has become a key battle at United Nations climate conferences.

Building levees, planting mangroves and improving drainage are in many cases no longer enough to save villages, says Shivanal Kumar, climate change adaptation specialist at Fiji’s Ministry of Economy.

“Many communities are in a real crisis – they were trying to survive,” he says. “The effects of climate change have been felt for many years and at some point they gave up and said now was the time to move.”

At last year’s COP26 climate change conference, industrialized nations agreed to only talk about compensation for the unavoidable impacts of climate change, including migration, that are affecting vulnerable societies.

At their summit, Pacific leaders called on developed nations to show significant progress towards a new goal at COP27: expeditious financing of such “losses and damages”.

COP26 President, British politician Alok Sharma, said in Suva on Wednesday he understood the frustration of Pacific villagers on the frontlines of climate change.

“They are forced to deal with the consequences of greenhouse gas emissions, most of which come from the top emitting countries that are far from here. This is not a crisis you made,” he said in a speech.

“We need to find a way to have a substantive discussion about casualties at COP27.”

In 2014, Fiji, an archipelago of hundreds of islands about 2,000 km (1,200 miles) north of New Zealand, became the first Pacific island nation to relocate a community due to rising sea levels.

Six villages have relocated or are planning to relocate with state support, but a new process to prioritize the most urgent relocations is still being developed.

Another 795 will have to move, says climate youth activist Salote Nasalo, who says she’s losing sleep thinking about where to go. Pacific youth will continue to protest the inaction on funding from big emitters, says Ms. Nasolo, a student at the University of the South Pacific.

The first community to move was Vunidogoloa, after villagers invited officials to see how they lived with water up to their knees. Saltwater has destroyed the 150 residents’ ability to grow crops, depriving them of their livelihood and food security, says former village chief Sailosi Ramatu.

In the new village, 1.5 km (a mile) inland on the island of Vanua Levu, children are now sitting on the ground in front of their houses, feet dry.

Mr. Ramatu, 63, says it took time to get the elders to move but the village came together and listened to experts.

“We can also make a decision in the world when leaders come together,” he says. “You should help us; they should pay for our loss and damage.”

https://www.independent.co.uk/arts-entertainment/photography/fiji-pacific-ocean-climate-change-sea-levels-b2138828.html Flooded communities in the Pacific Ocean want polluters to pay to move them off their ancestral land