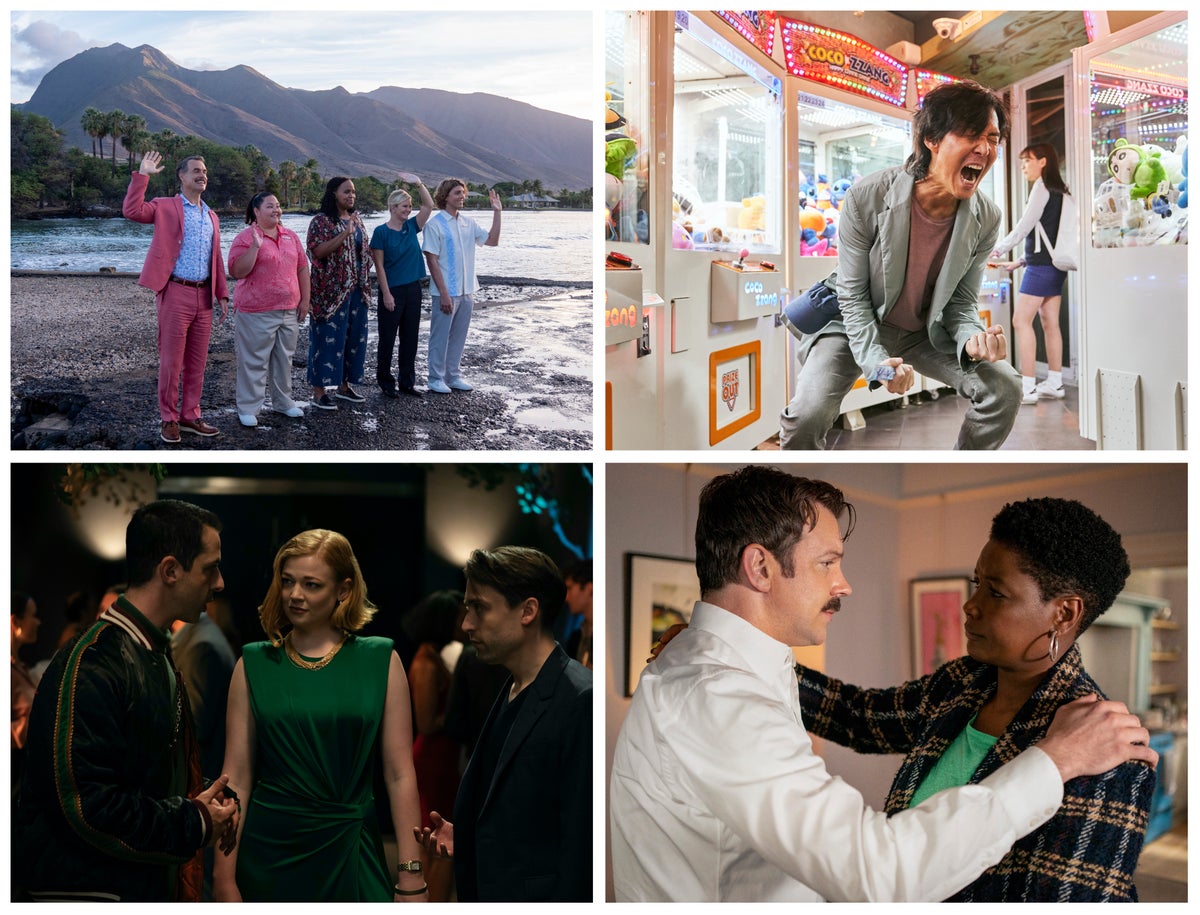 I hate publicly making predictions about who will win awards. And yet I’m also the person who annually creates an Emmy ballot using Google Forms and demands that her friends fill it out. I tally the points and distribute the results. Despite the fact that I watch television for a living, I rarely beat my friend Ben, who watches it voraciously.

Last year, the Emmys belonged to Ted Lasso. The year before was dominated by Schitt’s Creek. I’m most curious to see if that kind of straight-ticket voting prevails again, or if voters will cast more nuanced ballots that decouple an actor’s fate from that of the show they’re on. If the trend continues, it could be a big night for the stellar HBO miniseries The White Lotus.

This year, the 74th Emmy ceremony will take place on Monday, 12 September at the Microsoft Theater in Los Angeles, a shift from its regular Sunday night slot that was made to accommodate the Amercian football schedule. Our host for the evening will be SNL’s Kenan Thompson.

Now, onto my armchair prognosticating:

Succession is the incumbent here and the most nominated series overall in 2022, but buzz around Better Call Saul only got hotter over the course of its stellar final season. The fact that the series has not won an Emmy in any category over the years could mean that show creators Vince Gillian and Peter Gould are due for a parting gift.

Only Murders in the Building (Hulu)

What We Do in the Shadows (FX)

This category is one of the few in which an Apple TV+ series is favoured to win, and the Emmys love to stick with a winning horse. That said, season two wasn’t as critically well-received as the show’s first outing, which could make room for Quinta Brunson’s beloved sitcom about overworked teachers. The hype around the Abbott Elementary debut reminded me of the hype that surrounded, well, Ted Lasso’s first season.

Will win: The White Lotus

Should win: The White Lotus

The only nominated limited series not based on a real-life story is the reliable favourite in a category that has only grown in prestige in recent years. The White Lotus will likely win it for HBO, but Hulu is emerging as a strong contender in the category. Dopesick, which took home the Peabody Award for its wrenching portrayal of the opioid crisis in America, is the only other real contender.

Lead Actor in a Drama Series

Jung-jae goes into Emmy night having already picked up a trophy from the SAG and a Critics’ Choice Award, but support for Odenkirk, who hasn’t won an Emmy since his SNL days, has been swelling throughout Better Call Saul’s final season. Cox, who last won an Emmy in 2001, saw his Succession character Logan Roy’s role grow in a storyline that directly pitted him against his son – played by the 2020 Emmy winner in this category, Jeremy Strong.

Lead Actress in a Drama Series

Confession: I do not regularly watch Euphoria – I don’t have the constitution for it – but I’ve seen enough to know that if Zendaya repeats in this category, it will be a well-deserved accolade. But Yellowjackets’ Lynskey has had an incredible year so far (in the over-hyped Don’t Look Up and the under-watched Candy), and her memorable speech at the Critics’ Choice Awards is still pretty fresh in voters’ minds. The SAG winner in this category – Squid Game’s Jung Ho-yeon – is nominated in the “supporting” category at the Emmys.

Lead Actor in a Comedy Series

Steve Martin (Only Murders in the Building)

Martin Short (Only Murders in the Building)

This category is incredibly stacked, with both Hader and Sudeikis previously winning for the exact same roles they’re nominated for this time around. Glover, too, has won this category in the past for Atlanta, but after a long hiatus, critical acclaim for the show has cooled. Hader has won for Barry twice previously, and the series’ third season is arguably its strongest.

Lead Actress in a Comedy Series

Smart is the electric fan-favourite for Hacks, but I think there’s still a chance for Issa Rae, whose woefully under-nominated series Insecure ended this year. Comedy categories have a tendency toward big sweeps (see: Ted Lasso in 2021, Schitt’s Creek in 2020, and Fleabag in 2019), so there’s always a chance Brunson takes it all.

Lead Actor in a Limited Series or Movie

Andrew Garfield (Under the Banner of Heaven)

Oscar Isaac (Scenes From a Marriage)

This is an interesting category this year, full of great performances in shows that ultimately weren’t as successful as their leading men (Firth, Stan, Garfield). The smart money is on Keaton for Dopesick, but Patel and Isaac both feel like avatars for their respective series, which didn’t see any other acting nominations despite finding success with critics (I loved both).

Lead Actress in a Limited Series or Movie

This year, there’s no standout performance in the style of Kate Winslet’s cop in Mare of Easttown, and the category feels pretty wide-open. This would be Sarah Paulson’s second Emmy across eight nominations if she wins for the mediocre Impeachment; Amanda Seyfried’s husky-voiced turn in The Dropout was more memorable than the series itself; and Margaret Qualley was heartbreaking in Maid, a show that was released so long ago I forgot it aired this year. I’m ruling her out on account of the recency effect, but personally, it was my fave performance of the six.

Supporting Actress in a Drama Series

This is a tough call. Garner has gone two for two at the Emmys with Ozark and I think voters who overlook her for Inventing Anna may reward her for a third time in this category. Similarly, Euphoria’s Sweeney – who was also nommed for a less meaty role in The White Lotus – might find voters recognise her here to make up for a snub elsewhere. And lastly, we have Snook. She’s yet to win for Succession, and a wily arc for her character Shiv allowed Snook to make a convincing case for why she finally should.

Supporting Actor in a Drama Series

That The Morning Show’s Billy Crudup beat the Succession nominees in this category last year is the kind of fact my mind refuses to absorb. I’ve had to double-check it multiple times to make sure I didn’t invent it. Maybe the Succession voters split? I truly don’t understand it. Remember in season one when Crudup’s character declared for no reason whatsoever and with extreme gusto that he’d sourced his falafel using an Eater article? Unhinged writing, chaotic performance. I see no reason why he can’t win again, especially with the Severance and Squid Game voters split, too.

Should cooler heads prevail, though, I think we’ll see Matthew Macfadyen at the podium. I’d be just as happy to see Culkin up there, though it does largely feel like a comedy role in the midst of a drama series.

Supporting Actress in a Comedy Series

This category leads me back to my “comedy sweeps” theory, which makes it a Ted Lasso (three noms) v Abbott Elementary (two noms) slugfest. If the voters stick with AFC Richmond, Waddingham will likely repeat.  But if Abbott takes the night, either Ralph or James has a shot. It’s worth noting, as well, that this is the last time McKinnon, who’s won this one twice before, will be eligible for SNL.

Supporting Actor in a Comedy Series

“He’s there, he’s there, he’s every f***ing where! Roy Kent.” Ted Lasso is a very good show, but it is greatest when Goldstein’s Roy Kent is centre-stage. Nick Mohammed is terrifically conniving as club turncoat Nate, but I almost hate that guy too much to root even for the actor who plays him. Almost.

Supporting Actress in a Limited Series or Movie

Coolidge and Rothwell were perfect scene partners on the first season of The White Lotus, so much so that it’s a shame they can’t be rewarded jointly. Still, it’s Coolidge’s award to lose. The bigger story here is that despite the fact there’s a gabillion of hours of TV made every year, these seven noms come from only two series. If The White Lotus was too mean-spirited for you, Dever becomes the obvious alternative.

Supporting Actor in a Limited Series or Movie

The White Lotus works, in huge part, because Bartlett throws everything into his performance as the manic, threadbare hotel manager. If Murray Bartlett does not win this award, I will eat a lei.

But like in the supporting actress category, few individual shows are repped here. My fear is that if the Dopesick (three noms) voters and The White Lotus (three noms) voters split, it leaves only Seth Rogen, who delivered a completely passable performance as the guy who stole Pam and Tommy’s sex tape, to pick up the award.

https://www.independent.co.uk/arts-entertainment/tv/features/emmys-2022-who-will-win-b2161313.html Emmy Awards 2022: Who will win and who should win

Harry Styles opens up about speculation surrounding his sexuality