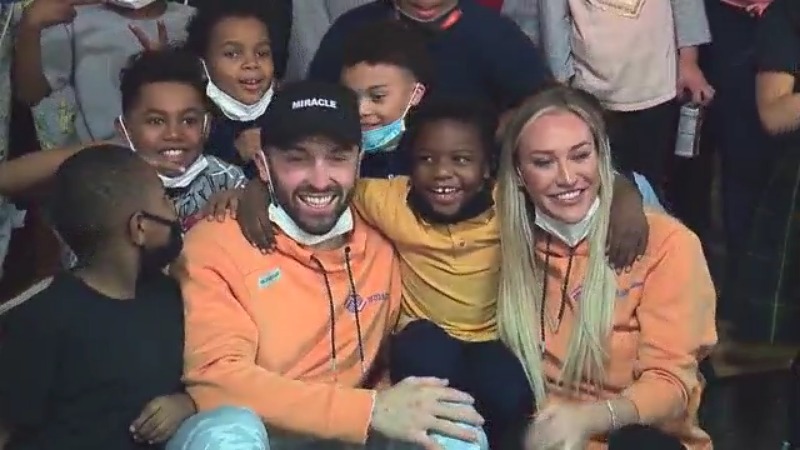 ELYRIA, Ohio (WJW) – Cleveland Browns winger Baker Mayfield found himself surrounded and attacked from all angles on Monday as he was thrown by snowballs.

But it was all a lot of fun and the luxurious snowballs were just part of an event being held at the Boys and Girls Club in Elyria called “Passing the Joy”.

“It makes sense to our values ​​that we love being around kids in any form,” said Baker, who joined his wife Emily.

In its second year, Mayfields partnered with a number of sponsors, including Meijer, Bodyarmor and The Camwood Group, to distribute gift bags to 900 children at Boys and Girls Clubs across Northeast Ohio.

About 75 kids were at the gym on Monday to take pictures with Baker and play diving with Emily.

“It was huge for our kids and an opportunity they will never forget,” said Jeff Scott, CEO, Boys and Girls Club of Northeast Ohio.

But the highlight of the afternoon was definitely the snowball fight and the Mayfields didn’t hold back, and at times seemed to be surrounded and hovered by the kids.

“I feel a bit targeted,” Emily said with a laugh.

The pair sponsored other events benefiting the Men’s and Women’s Clubs in Northeast Ohio, including a foot race in June, and Baker donated all of his Nike gear over the course of a year. five.

“We have been very fortunate and so being in a position to be able to give back to a city that has given us tons is a huge priority for us,” says Emily. speak.

Even more than gifts, Baker said, he hopes to inspire kids to never give up on their dreams.

“I told them it wasn’t about the cards you were dealt, but what you did with those cards,” Baker said. “It’s all about being able to tell our kids the future of our country and just being able to see them laugh and enjoy it.”

'I've never seen a supercell like that,' Is tornado alley changing locations?