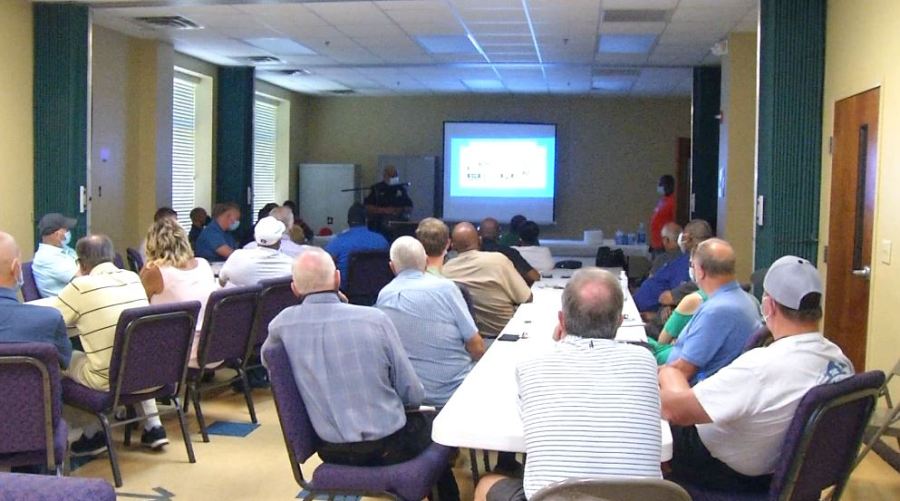 FUQUAY-VARINA, NC (WNCN) — After multiple mass shootings in recent weeks, a local police chief is making sure his own community knows how to protect themselves — if needed.

“In the last two weeks we’ve had three attacks on churches across the country, and it’s only an apparent growing number of churches that are being attacked,” said Brandon Medina, Fuquay-Varina Police Chief.

Medina spent his Saturday morning with representatives from about a dozen local churches to make sure they know how to protect themselves.

With a ready-to-use PowerPoint presentation, Medina went through security plans with church leaders and members and offered guidance.

“When you have bushes that are really tall, you want them lower,” he explained to the group. “Windows, you want to make sure they’re secured, you can’t look in openly.”

He focused on what communities should be prepared for if they are ever faced with an active shooter. He mentioned the idea of ​​”run, hide, fight”.

He says in situations like this, people should run if they can. If people can’t run, they should hide.

When unable to hide, humans should be ready to fight, finding furniture like chairs to defend themselves.

While Medina said he hopes no one is ever faced with such a situation, he says there is no shortage of things that could drive someone to violence.

“We have mental health issues, we have domestic violence, people waking up with hate,” Medina said.

While a few dozen people came to the training, Medina says his team wants to reach more people, and they will offer this training at any time.

“We did them in the afternoons, we did them late at night, on the weekends, on weekdays,” he said.

The drawing of Mega Millions winning numbers does not result in a jackpot winner; Lottery prize grows to $1.02 billion